“If my art means something to someone, that in and of itself inspires me to create more.” 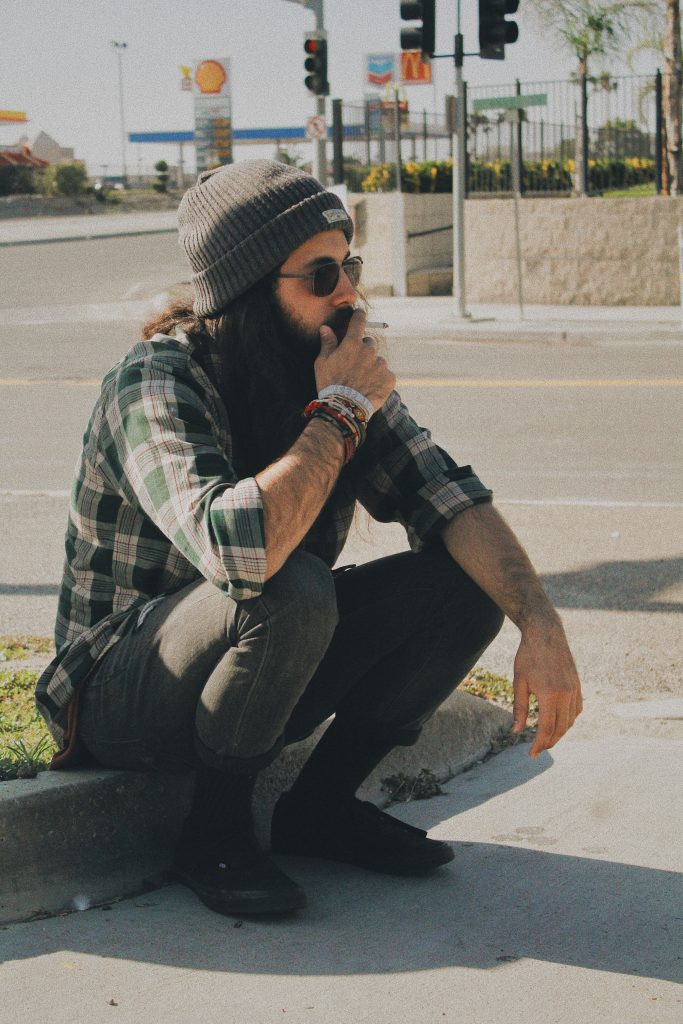 S: How would you describe your artwork?

D: I’m still very new to painting, so I’m not too familiar with the technical terms. However, as far as tone goes, I’d say that my pieces have a sort of melancholy around them. Whether it’s a more minimal or abstract piece, I think that tone comes through in one way or another.

S: How did you first become involved with making art? Is this your full-time passion?

D: Well, my background in art was actually more focused in music production originally. The idea of painting was very intimidating to me. It seemed too tedious and I wasn’t confident in my abilities to convey an idea on canvas. The farthest I ever got with visual media was graphic design, back in high school. It was more comfortable in that there’s a sense of control with a mouse and keyboard that I was afraid I wouldn’t have with paint and brushes. It wasn’t until a few months back, while I was having a bad night, that I decided to paint something. Discouraged about how long it took me to write songs and many other things, I drove to Walmart, picked up a canvas and some materials and just started to slap whatever felt right on the canvas. I realize that I didn’t need to have any image in my mind to try and recreate. I wanted something immediate and tangible. Something creating music wasn’t giving me at the time. Is this my full-time passion? No, I’m too broke right now… 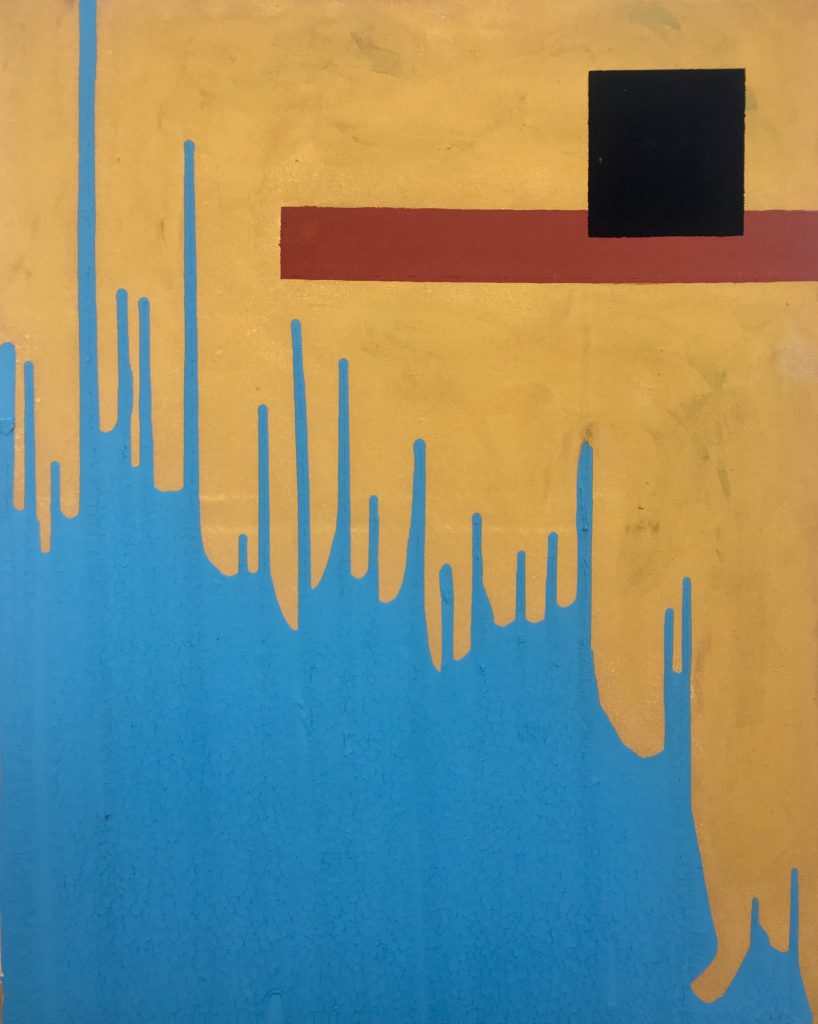 S: What inspiration do you draw from your artwork?

D: Music is something that conjures up images in my head fairly easily. It’s not even so much lyrics or songwriting as much as it is sound design that really gets my imagination going and inspires me. I also really draw from my own thoughts and ideas a lot. I’m stuck inside my own head more than I think I should be and I’ve been dealing with mental illness for longer than I’d like. Translating those layered thoughts and mindsets onto the canvas is extremely cathartic and liberating. I’m inspired by wanting to see how my brain works in a tangible way, more or less. It’s not that deep though. My paintings don’t mean anything and I like it that way. It’s simply the act of painting that motivates me to do it. However, the viewer can apply whatever thoughts and ideas they want onto a piece. That’s their own catharsis and I like that too. If my art means something to someone, that in and of itself inspires me to create more. 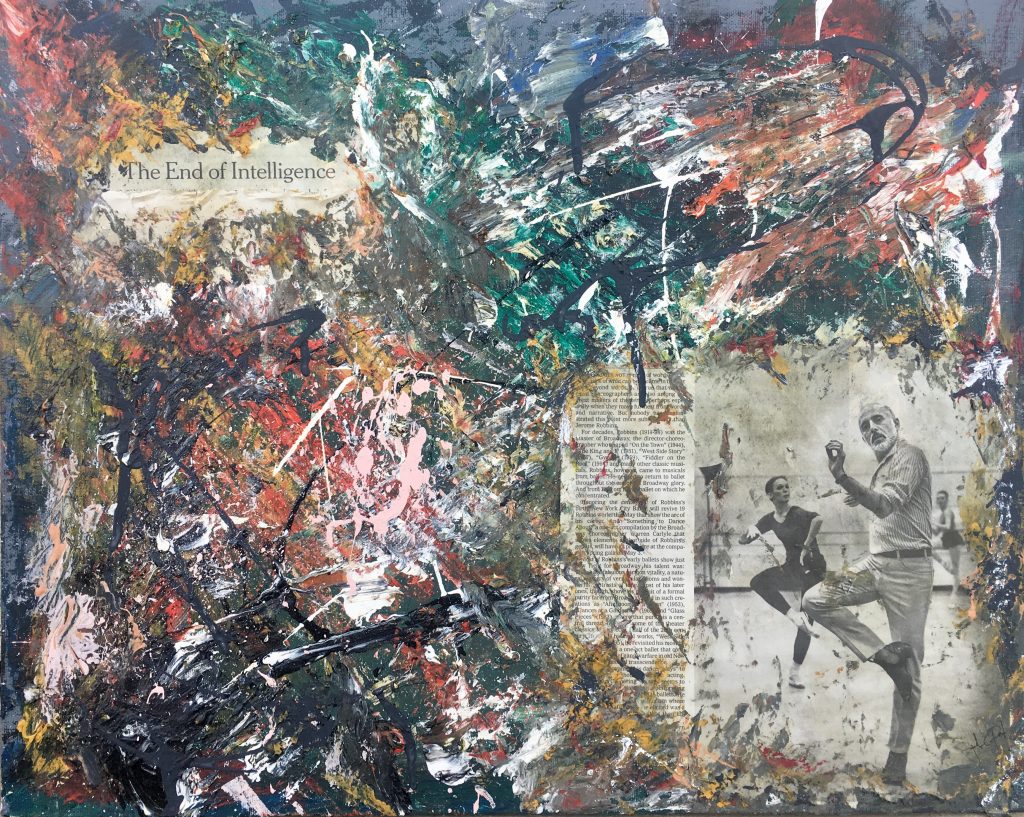 S: What is your process when you create your artwork? Are you consistent with one approach or various?

D: I don’t have any solid area in my folks’ house to paint in, so I have an old shower curtain on the back patio, held down with rocks where I paint. I toss the canvas down, play some random ambient compilation, smack stuff on the canvas and continuously send photos of my progress to my girlfriend to make sure what I’m making isn’t total garbage. I also try my best to mix my approach up whenever I feel like it. I’m still learning, so anytime I think of a new way to implement something into a piece, I’ll try it. Whether it be newspaper, glass, my cigarette butts, etc… I just wanna see if it looks cool on the canvas. 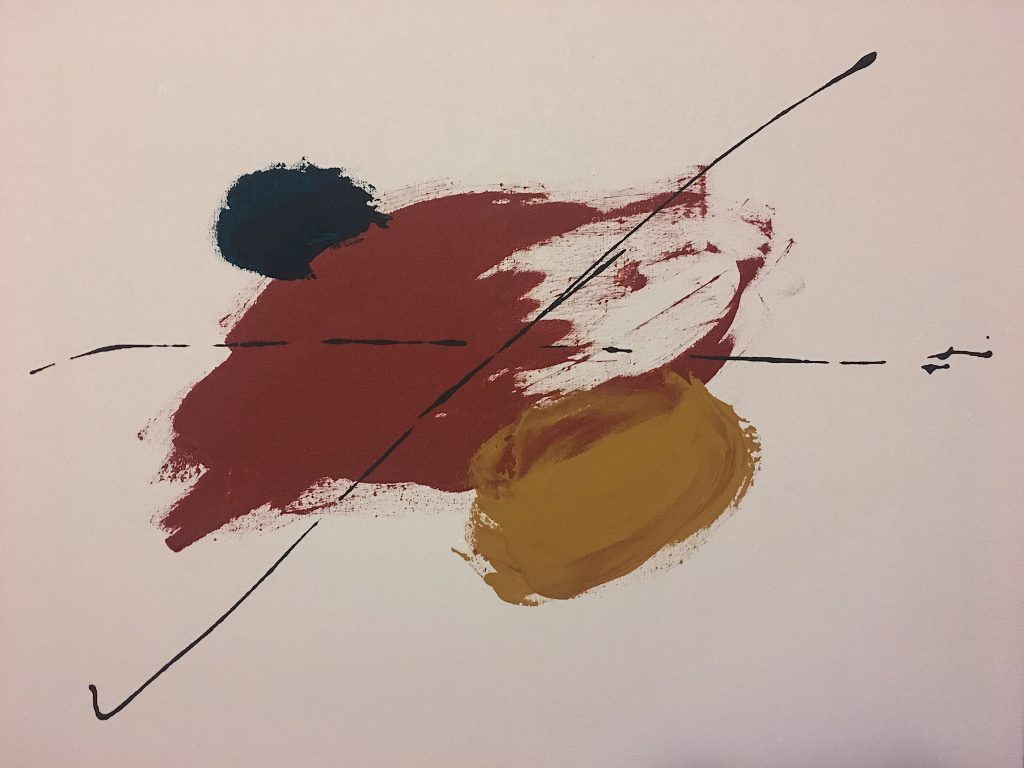 S: What tools do you utilize to make your pieces?

D: Typically I just use oil or acrylic paint and a painting knife. Lately I’ve been trying to see how else I could go about things. I’ll use newspaper clippings and tape some areas off for layering. And if I’m “brave enough” I’ll use a brush, despite having ridiculously shaky hands… 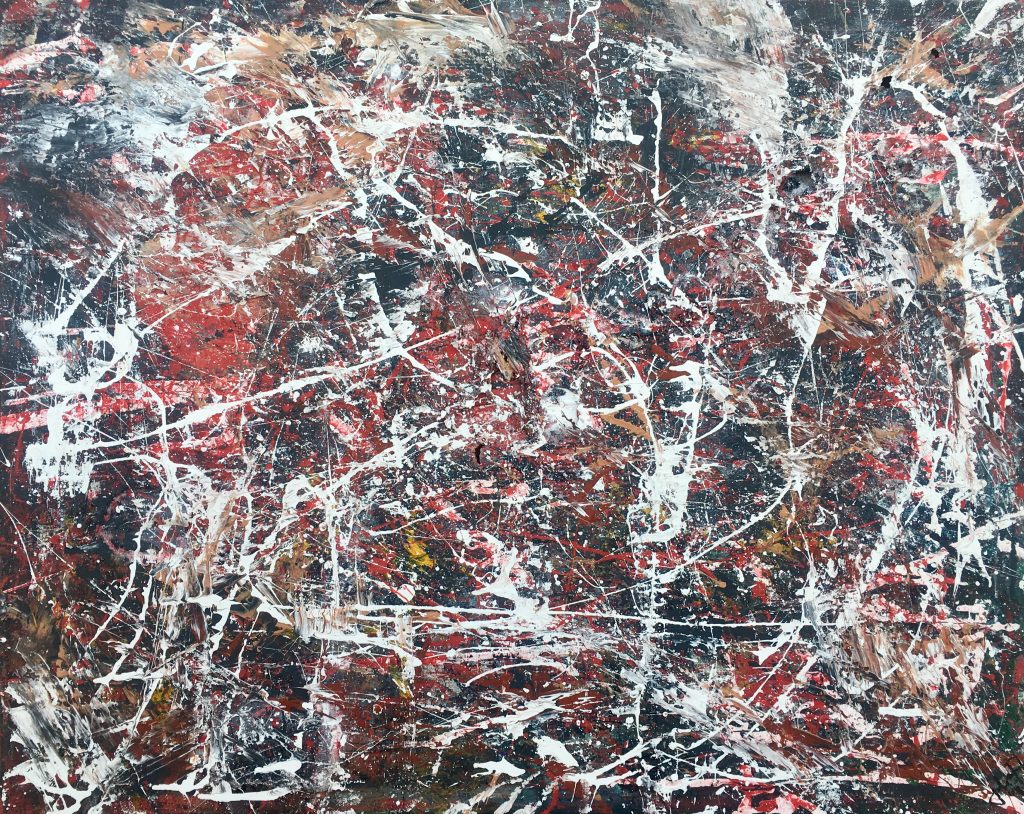 S: What is the art scene like in the Central Valley? What makes you different from other artists?

D: Well, being relatively new to the Central Valley, I haven’t seen too much of what other people are doing yet. That’s a goal of mine; to meet and make friends with like-minded artists around here. What I have seen has been very encouraging though! It seems the folks pursuing art around our area are genuinely drawn to it and that’s uplifting.

What makes me different? Ha, I have no idea. I wanna say “nothing” because we’re all just trying our best and making it work. 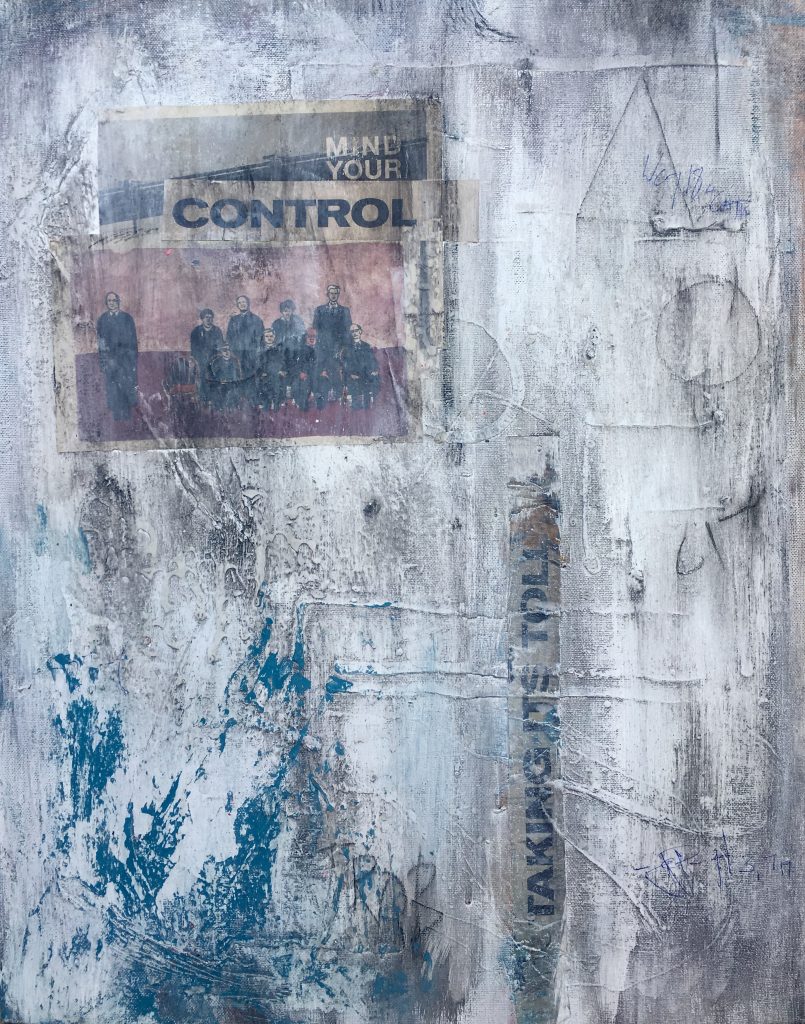 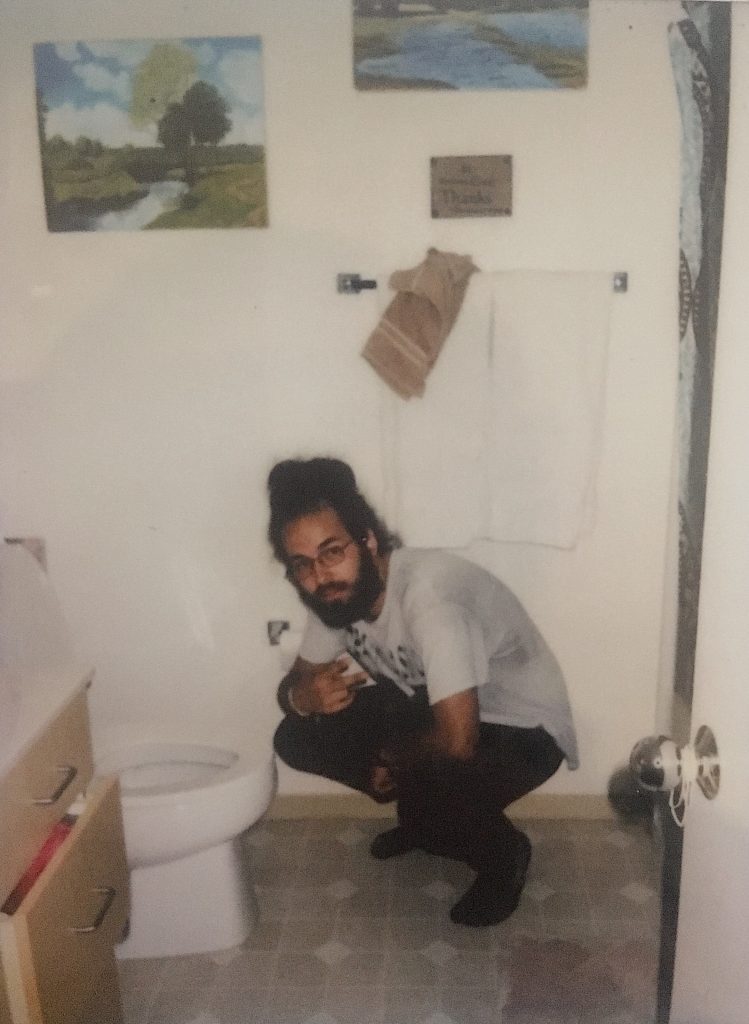